John Jarvis and Lori Carlson hosted an open house of their extensive butterfly garden in Hillsborough, NC to CBS members and others, to show what plants work well at attracting butterflies, or serve as host plants. Visitors were welcome to bring their own plants to swap, or take home any of the giveaways to plant in their own yard. John and Lori gave personalized tours showing visitors the different host and nectar plants and explained the history of their gardening adventure. General education and information about butterflies and gardening was also provided.

The yard had been fairly absent of butterflies but the release of a dozen Monarchs that morning in the garden seemed to encourage other species to show up. A total of 24 different species were sighted during the day. About 24 people came to see the garden and take home some plants. A second open house is scheduled for August 12th when the butterflies will be at or near their peak as a follow-up. 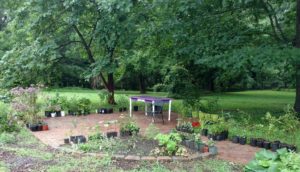 Plants ready to be swapped or given away

We partnered with Big Bloomers Flower Farm for the first annual Butterfly Day to offer general education and information about butterflies, conducted a raise-a-caterpillar workshop, and Creating Your Own Butterfly Garden presentation. Crafts and a DIY butterfly fruit plate activity were also offered. Attendees got to see Black Swallowtail and Silver Spotted Skipper caterpillars. Thirteen Black Swallowtail caterpillars went home to be cared for by workshop participants. The event ended with a butterfly release of a Monarch, six Black Swallowtails, and one Silver Spotted Skipper.

Highlights of the event were posted on the Big Bloomer’s Facebook page along with a live video stream. 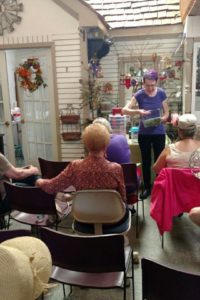 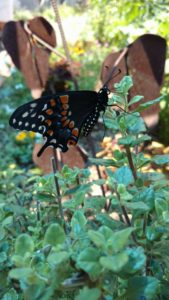 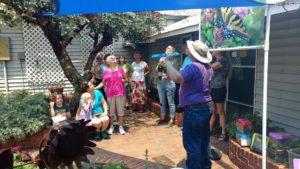 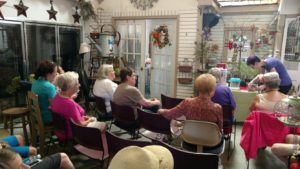 John Jarvis and I hosted four homeschool families for a Caterpillar Raising Workshop for Black Swallowtail caterpillars. The day before about 19 Monarch butterflies eclosed from chrysalis and soon became the stars of the rainy, dreary afternoon. The class was comprised of about a dozen children ages 3-11. Parents learned along with their children the basics for caring for a Black Swallowtail caterpillar and chrysalis. Each family went home with at least two caterpillars to raise along with a fennel plant.

Once the objective of the class had been accomplished the Monarch butterflies were brought out and distributed for the children and parents to enjoy, identify the sex, and eventually release outside. Everyone greatly enjoyed wearing two or more butterflies. 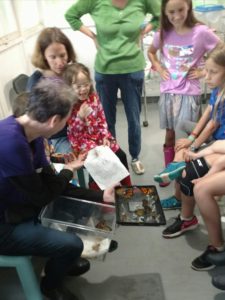 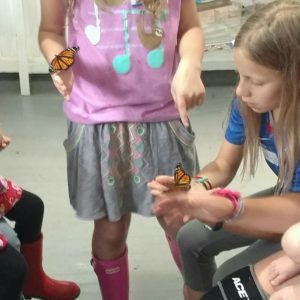 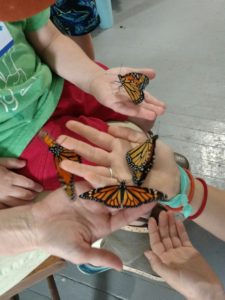 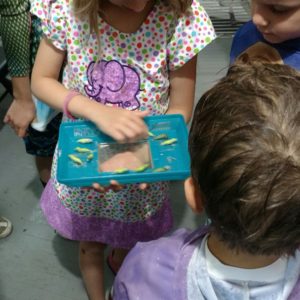 John Jarvis and I conducted our first butterfly ID class for children at Few’s Ford (Eno River State Park, Orange County) followed by an hour long butterflying session. The class was made up of two families and seven kids ranging in ages 3-10.

Though the peak of the butterflies at the site had passed, the children were able to see many Great Spangled Fritillaries, and a very tame Juniper Hairstreak perched on a daisy, as well as the easily sighted Azures and Eastern Tailed Blues. All of the kids quickly caught on to spotting butterflies and moths in the environment. One of the older children, Alexander, called out to us he saw a butterfly and it turned out to be an elusive Anglewing. A new world of exploration had been opened up to them. By the end of the hour’s walk I teased them by asking if they would be up for doing it for six hours as we always need participants for butterfly counts. While there wasn’t a lot of enthusiasm for the duration, many were interested in helping for a couple of hours.

Together we saw the following butterflies:

Triangle Chapter members Ellen Brown, John Jarvis, and Lori Carlson braved the first 90°F day of the year and conducted community outreach at the North Carolina Botanical Gardens Spring Plant Sale in Chapel Hill. That morning a little more than a dozen Monarch caterpillars had been discovered in John and Lori’s garden. They, along with a couple dozen Black Swallowtail caterpillars and a newly eclosed male and female Black Swallowtail butterfly, were the stars of the afternoon.

In addition to providing gardening questions and information about raising butterflies, a quick “make and take” project of a DIY fruit plate feeder for butterflies proved to be popular. 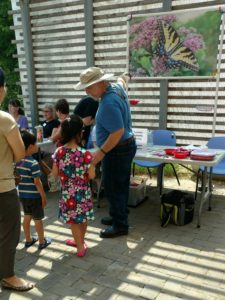 The Triangle Chapter conducted its first community outreach and fundraising event Saturday, April 1, 2017 from 8am to 12pm at the Duke Gardens Spring Plant Sale. Brian Bockhahn, John Jarvis, and Lori Carlson answered gardening questions, provided basic butterfly education, and talked about the CBS organization. A couple of Eastern Black Swallowtails had eclosed from overwintering as a chrysalis and were the stars of the morning.

A trial fundraising was conducted by offering Asclepias tuberosa, common fennel, and assorted cultivars of lantana. The lantana sold out within 90 minutes and the tuberosa plants sold out within three hours. All but two of the fennel were sold making the last-minute effort a success! 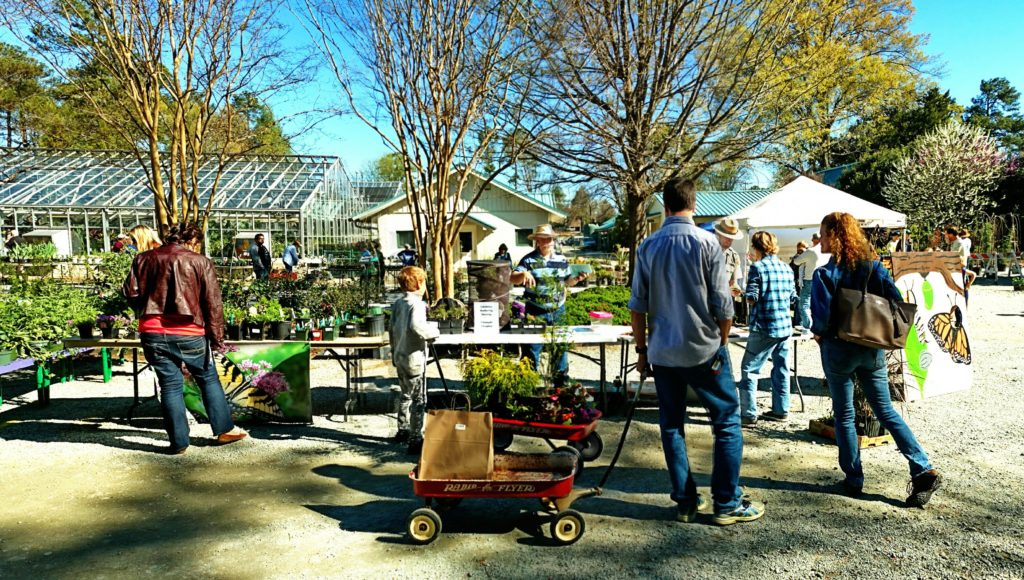