The Triad Chapter of Carolina Butterfly Society held a successful outing on Saturday, March 19, on the Reedy Fork Trail in Guilford County, NC. Our target species was Falcate Orangetips. Shortly after we entered the trail we saw our first one and ultimately counted at least 7 individuals, of which at least three were females.

The chapter usually has morning butterfly outings but we began this trail walk around 1:30 on this official last day of winter when the air was warmer and butterflies were more likely to be flying. The temperature was around 70 degrees under a partly cloudy sky. We were concerned about the unusually high wind but it was quieter along the woodland trail than in the open parking area so presented no problems. We spent about an hour and a half on the trail.

Although there was a lot of blooming Hairy Bittercress, a host plant for our target species, none of the Falcate Orangetips paused long enough to allow photographs. In addition we spotted a larger high-flying orange-brown butterfly that was likely a Common Question Mark or Eastern Comma.

Mark your calendars: We intend to return to this same trail on April 9 in search of Zebra Swallowtails. By that time, the host plant for that species, pawpaw, should be blooming. We expect that Falcate Orangetips still will be flying, and sometimes we see other woodland butterflies along the trail this time of year.

Thanks to Anne Carlson for being the trip coordinator. She also will be the coordinator of the outing on April 9th. Let her know if you would like to join us.

The Triad Chapter of the Carolina Butterfly Society held a butterfly walk in Reynolda Gardens, Winston-Salem, Forsyth Co., NC, on 8-26-17. This was a substitute location for the trip scheduled for the Greensboro Arboretum that was announced earlier.

It was a comfortable morning for butterfly watchers, although a bit cool and cloudy at the start for the butterflies. We began at 9:30 with a temperature of 68 degrees and an overcast sky. Butterflies were scarce. However, as the clouds blew away and revealed the sun, the air began to warm and butterflies became more active. It was about 80 degrees and sunny when we finished just before noon.

We saw 12 species of butterflies, including 11 Black Swallowtail caterpillars on one dill plant. There were no real surprises, although we saw two Painted Ladies but no American Ladies.

One plant in the garden caught just about everyone’s attention: a vine with hundreds of racemes of small deep orange to pale yellow flowers, Ipomoea lobata, which is in the same genus as morning glories. This plant, known variously as Firecracker Vine, Spanish Flag, and Exotic Love Vine, is a native of Brazil, according to Wikipedia. It was well attended by hummingbirds, in addition to drawing many pollinators of different species.

The Triad Chapter of the Carolina Butterfly Society held our scheduled butterfly walk in Reynolda Gardens, Winston Salem, NC, on Saturday, July 22, despite the forecast of sunny, very hot, and humid weather. The forecast was right. We began about 9:00 am with a temperature of about 83 degrees, which wasn’t too bad. However, the garden was very humid due to an early morning watering of the flowerbeds and lawn, and there was almost no air movement to cool things.

Despite the heat, we enjoyed walking through the beautiful gardens, and we managed to accumulate a small list of 10 species. There is a long flowerbed that forms a median at the entrance. It was alive with skippers, too many to count. Most were Fiery Skippers with Silver-spotted Skippers a close second, and also a scattering of Sachems and a few Ocola Skippers.

The Triad Chapter of the Carolina Butterfly Society held our scheduled butterfly walk in Reynolda Gardens, Winston Salem, NC, on Saturday, July 22, despite the forecast of sunny, very hot, and humid weather. The forecast was right. We began about 9:00 am with a temperature of about 83 degrees, which wasn’t too bad. However, the garden was very humid due to an early morning watering of the flowerbeds and lawn, and there was almost no air movement to cool things.

Despite the heat, we enjoyed walking through the beautiful gardens, and we managed to accumulate a small list of 10 species. There is a long flowerbed that forms a median at the entrance. It was alive with skippers, too many to count. Most were Fiery Skippers with Silver-spotted Skippers a close second, and also a scattering of Sachems and a few Ocola Skippers.

On Saturday, June 17, thirteen of us explored part of the Poteat Farm in Jamestown, Guilford County, until about noon. The weather was mostly overcast, very humid, with temperatures in the mid 70s. This was a joint trip with the T. Gilbert Pearson Audubon Society of Guilford County.

The Poteat Farm in Jamestown, which is about 70 acres, is a privately owned nature preserve along the Deep River between High Point and Greensboro. Owner Marie Poteat has reintroduced native grasses and other flowering plants in the old farm fields and wooded areas to attract butterflies, birds and other wildlife. Marie actively manages her property to reduce non-native plants.

Marie also has actively increased the number of milkweed species and numbers of milkweed plants all over the property, so butterfliers who are interested specifically in milkweeds had the rare opportunity to see and compare about a dozen milkweed species on this one site. We also found several host plants for other butterflies.

Although we had a great time seeing the plants and birds, the weather conditions were not conducive to butterflies. We saw only the following five species:

We appreciate Marie opening her property to us! 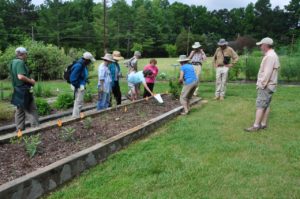 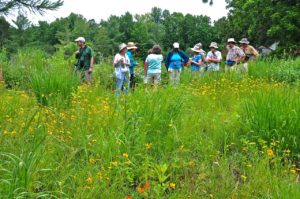 On Saturday morning, June 10, members of the Carolina Butterfly Society Triad Chapter held a butterfly walk in Historic Bethabara Park in Winston-Salem, NC. This outing was rescheduled from May due to rain on the original date. The weather this time was warm, sunny and muggy with the high temperature reaching about 80. Fifteen folks participated.

We were met by Harriet McCarthy, the volunteer in charge of the gardens and a CBS member, who showed us the Monarch Waystation that she organized three yeaers ago and put in place with other Master Gardeners. She also give us an informal tour of the vegetable and herb garden that has many of the same varieties of plants that the early Moravian settlers are thought to have planted on this historic site.

After checking the butterflies in the gardens, we walked a short part of the adjacent greenway. Butterflies were scarce there, possibly because flooding in the past weeks has suppressed nectar flowers. We finished the walk along the edge of the woods on the way back to the parking area.

The following is a cumulative list of 18 species for the group. Thanks to Gene Schepker for compiling it.

Our timing was right this time…we saw Brown Elfins on our Elfin Trek.

It has become almost an annual event for the Triad Chapter to look for Brown Elfins on the aptly named Brown Elfin Knob Trail at Occoneechee Mountain State Natural Area in Orange County just outside Hillsborough. Brown Elfins have a very narrow flight period in early spring. Some years we’ve hit it right, some years not.

On Sunday afternoon, April 2, we headed for this site just a bit over an hour east of the Triad. When we arrived at the parking area, we were surprised to find it full. Coincidently, Brian Bockhahn, education specialist for NC Parks, was leading a butterfly walk, and there were at least 35 people there for the short hike in addition to the normal weekend crowd. His target was Brown Elfins, as well, so Brian graciously allowed us to join his group.

With Brian in the lead, we didn’t get far before we began seeing butterflies. Several Eastern Tiger Swallowtails flitted by, and we saw Eastern Tailed-Blues, Silver-spotted Skippers, and Juvenal’s Duskywings within just a few yards up the gravel road. Not much further along as we were entering the woods Brian pointed out a Carolina Satyr, noting that it is the “mascot” butterfly of the Carolina Butterfly Society. By the end of the walk the group collectively had seen a dozen species, including our target butterfly. Here is Brian’s tally:

On Sunday, Oct. 16, four of us visited the Greensboro Arboretum in the morning, then went into northwest Guilford County, NC, near the Forsyth County line to look along two dirt roads.

We saw a total of 5 Monarchs. While driving, we saw several Cloudless Sulphurs in addition to those at the two sites. Frost Aster was the primary nectar plant, although a few other species were being visited, including Jewelweed in damp areas. There were many unidentifiable grass skippers moving among the flowers at a distance. We identified a total of 15 butterfly species.

The temperature high was 78 degrees under a sunny, sky with a light breeze. The first number in the list below is the arboretum; the second number is in the northwest corner of the county.

Attached are a few photos from yesterday.

On Saturday morning, Aug. 27, 2016, under a sunny sky and in humid weather at Reynolda Gardens in Winston-Salem, NC, seven of us counted the following butterflies in about an hour and a half:

There were so many skippers that they were uncountable. Not only were there a lot of them, they were moving constantly, so an exact count was impossible. The vast majority were Sachems followed by many Fiery Skippers.

Despite the high humidity, we had a great time in a beautiful garden setting. Thanks to Barbara Cullen for organizing and leading our group.

Posted for the Triad Chapter by Dennis Burnette, Greensboro, NC

15 people walked around the Butterfly Garden, the Community Garden, and the Medicinal Garden for an hour and a half under VERY muggy conditions this morning as the temperature rose from 77 to 84, with RH in the upper 90s and calm wind.

Plenty of butterflies, but not much diversity. Nectar sources were mainly zinnia, tithonia, and phlox.