Twenty-four of us (a great turnout!) took a butterfly walk in the Greensboro Arboretum on Sunday afternoon, July 10. This was a joint outing with the T. Gilbert Pearson Audubon Society of Guilford County. We had moderate success finding butterflies for this time of year, and everyone seemed to have a good time. The weather was quite cooperative with temperature in the upper 80s and a sunny sky with a light breeze.

Butterflies have been a bit scarce in the Triad lately, presumably because the recent dry weather may have caused plants to stop producing nectar. Recent rain seems to have turned that around. We were successful in finding eleven species of butterflies, including three Monarch butterflies, at least one of which was a female. We searched through many milkweed plants along the creek but didn’t find any caterpillars. Maybe she’s laying eggs now and we’ll find caterpillars in a week to 10 days.

We were able to find Pawpaw trees, the host plant for Zebra Swallowtail butterflies, that had fruit on them, a first for many folks. Unfortunately, that particular species of butterfly was a no-show, however. One of the nicest sightings was a very fresh and colorful Red Admiral butterfly sipping nectar from Purple Coneflower. See the attached photo.

The Carolina Butterfly Society Triad Chapter sponsored a field trip to Pilot Mountain State Park in Surry County, NC, on Saturday, June 25. We had a congenial group of 9 participants.

The weather was very comfortable for us humans, although possibly not so much for the butterflies. Although it was mostly sunny for the first hour and a half, the sky became hazy and then overcast later in the morning. The temperature ranged for around 73 to about 78, an unusually cool morning for this time of year.

We found only nine butterflies of six species. The list is below. We speculated that the low numbers are influenced by the on-going drought in this area, which is likely to have reduced the nectar availability. We also wondered if the natural midsummer decline in some butterfly species that are between broods already has begun.

Although it was a butterfly walk, we saw other things of interest. In the dry meadow at the base of the mountain access road we saw two species of dragonflies, 1 Widow Skimmer and 2 Eastern Amberwings, all females. In addition, we were happy to see two blooming native plants that we don’t often see, the native orchid Nodding Lady’s Tresses (Spiranthes cernua) in the meadow and a small native of the lily family, Yellow Star Grass (Hypoxis hirsuta) on the top of the mountain.

The birders in the group saw or heard quite a few species of birds but nothing unusual or unexpected, and we saw two different spotted Whitetail Deer fawns, one in the meadow and one in the mountaintop picnic area.

Despite the low number of butterflies, it was a very nice outing!

On Sunday afternoon, April 24, the Triad Chapter of the Carolina Butterfly Society held a butterfly field trip to Occoneechee Mountain State Natural Area in Orange County, NC near Hillsborough. The day was dry and sunny with temperatures in the upper 70s. We had announced the trip on Carolinaleps so in addition to Triad members we also had participants from the Triangle and as far away as Greenville, NC. We expect to have more field trips closer to the Raleigh/Durham/Chapel Hill area this summer. Everyone is welcome.

We had hoped to see Brown Elfins. We were aware that this was a bit late but had seen them near this date at that site in previous years. Alas, we missed them this year. Lori Carlson made up for that by spotting and photographing Dusted Skipper nectaring on Creeping Charlie near the parking area. We ended the afternoon with 18 species of butterflies. The list is posted below.

Given the late notice of our field trip and the cloudy and cool weather forecast, we had a good turn out of 8 people for our first Triad Chapter butterfly walk of 2016. We met at Harriet McCarthy’s butterfly garden in Historic Bethabara in Winston-Salem. The morning actually was both warmer and sunnier than predicted.

Only a few plants were blooming; there were a few early one in the garden and several wildflowers (all non-natives) in the mowed lawn. They were attracting native bees of various species but no butterflies.

We had a nice walk of a mile or a bit more through the historic vegetable garden recreation, around the adjacent settlement grounds, and along the nearby greenway. We saw a Cabbage White, a second white butterfly that was too far away to identify, one Orange Sulphur, two azure species, and an Eastern Comma. Our walk was accompanied by the singing of Upland Chorus Frogs and American Toads.

Attached is a photo of one of the azures that paused long enough for the photographers in the group to grab a few shots. This one is by Ann Walter-Fromson. Any guesses about whether it’s a spring or a summer azure? 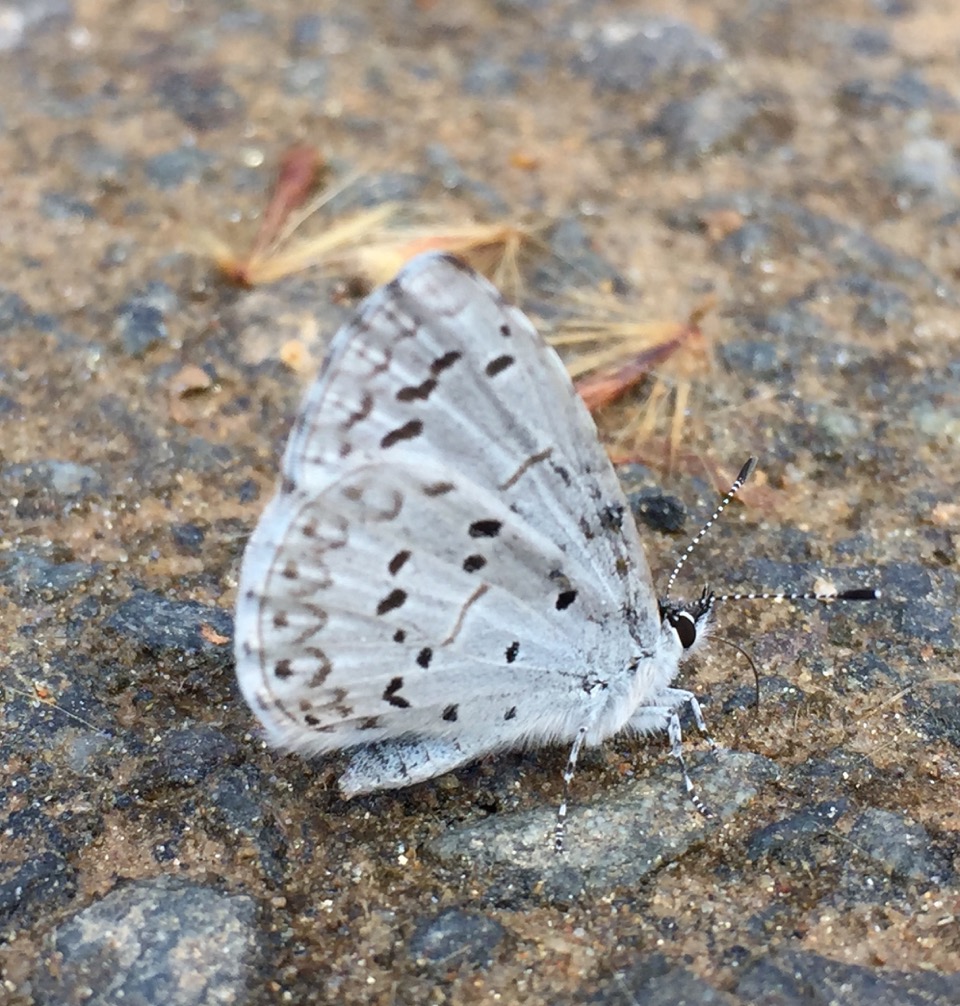 The Latta Plantation and Cowan’s Ford butterfly walk was jointly sponsored by the Triad and Midlands Chapters of CBS.

Total species 41, possibly 42 as there was an unID Pearly-eye.

The weekend was a success with sunny skies, although hot temperatures in the 90’s.

Many thanks to Ellen Brown for recording the sightings both days.

We had a great turn out of 15 folks yesterday for the Carolina Butterfly Society Triad Chapter butterfly walk in the old Moravian settlement, Historic Bethabara Park, in Winston Salem (Forsyth County), NC. First we checked the progress of the expansion of the butterfly garden hosted by CBS member Harriet McCarthy, who is in charge of both the oldest medicinal garden in the US as well as the new butterfly garden. Then we spent some time looking for butterflies around the grounds and the adjacent part of the greenway led by Gene Schepker.

Considering the paucity of butterflies in the eastern part of the Carolinas this year, we did pretty well. We saw a total of 40 butterflies of 14 species. Included among them were two particularly notable butterflies. The first was a Harvester that was perched on a blade of grass on its side just an inch or so off the wet ground. Not only is it good to see that species, the behavior was odd. Perhaps it was trying to dry our and warm up after a rainy night. (A photo is attached.) The second notable butterfly was a pearly-eye.

One of our group spotted the pearly-eye in the edge of the woods in dense shade where it was hard to see next to the brightly lit greenway. Someone in the group speculated that it could be a Creole pearly-eye, probably the least common of the three species of pearly-eyes that we have in most places in NC. Using their camera flashes, several folks got photos of it perched on the side of a tree at about eye level, which was good because it was hard to make out the details in the low light.

It clearly wasn’t a Southern Pearly-eye because the antennal clubs, which were visible even in the shade, were orange and black, not all black. That narrowed the choices to Creole Pearly-eye and Northern Pearly-eye. Creoles usually have 5 spots on the forewing, but none of the photos showed more than 4 on the one we were looking at, even though it did move it’s forewing up and down a slight bit. That left the other field mark, the so-called “knuckles” on the median forewing line. It did have some small knuckle-like extensions but they weren’t as largely “knuckled” as might be expected. Consequently, we’ve concluded that it was a Northern Pearly-eye. I’ve attached one of my photos.

The Carolina Butterfly Society Triad Chapter hosted a butterfly field trip in the hope that Triangle butterfliers would join us in Cedarock Park south of Burlington in Alamance County, NC. The park is about half way in between the Triad and the Triangle. In addition to several folks from the Triad, we did have two people from the Triangle, as well as one from the Charlotte area and one from Greenville, South Carolina.

It was a nearly perfect day for looking for butterflies. In our area the low numbers of butterflies in 2014 seem to be repeating in 2015 so far, so we didn’t have high expectations. Consequently, when we ended the morning with 68 butterflies of 16 species, we were happy. We even saw a couple of grass skippers, a group that has been scarce this year.
In addition to seeing a reasonable assortment of butterflies, we heard several Wood Thrushes singing, saw an American Toad and heard Cricket Frogs, encountered several species of dragonflies, and even spotted an Eastern Garter Snake. All in all, it was a fun outing.
Below is out butterfly list for the day.

The Triad Chapter of the Carolina Butterfly Society held a butterfly walk and caterpillar talk on Saturday, June 14, 2014, at Haw River State Park on the Guilford/Rockingham County line in North Carolina.

We met at 9:00 am during an unusual weather day for mid June in that it was sunny but the temperature at the nearby airport was only 68 degrees. Dew was still on the leaves when we set out. As people have been reporting all season, we have had a low number of butterflies throughout the eastern part of North Carolina from about Guilford County east, so combined with the cool morning, it was somewhat remarkable that we saw 13 species of butterflies in about a two hour period. All but four were single individuals, and the rest were two each. The list is below.

Following the walk, Jim Nottke, assisted by Charlie Cameron and Gene Schepker, conducted a talk and demonstration with live butterfly caterpillars that they had brought from home where they are rearing them. This was of particular interest to the children attending, although all of us learned a lot from the experience.

This event was open to the public as part of the NC State Parks “Year of the Lepidoptera” activities. Nothing is planned yet, but we talked with the park staff about doing something similar at a later date in late summer or next spring.

Below is the list of butterflies seen on this trip. All were in the Rockingham County portion of the park near the Haw River in a natural gas line right-of-way, and around the lake.

Fourteen butterfliers participated in the Triad Chapter’s field trip to Historic Bethabara Park in Winston-Salem, Forsyth County, NC on May 24.

We began the morning by checking on the progress of the expansion of the butterfly garden. Harriet McCarthy, a CBS member and also a Master Gardener, is the curator of this and other sections of the garden. Harriet explained the design of the butterfly garden and how it fits in with the other garden sections that include vegetables, fruits, herbs, and medicinal plants that are thought to have been used by the original Moravian settlers.

Following the garden demonstration, we spent some time looking for butterflies around the grounds, and we walked a portion of the adjacent greenway. This part of the outing was ably led by Gene Schepker.

Butterflies have been somewhat scarce in our area so far this season. We felt lucky to have seen 45 butterflies of the following 12 species: